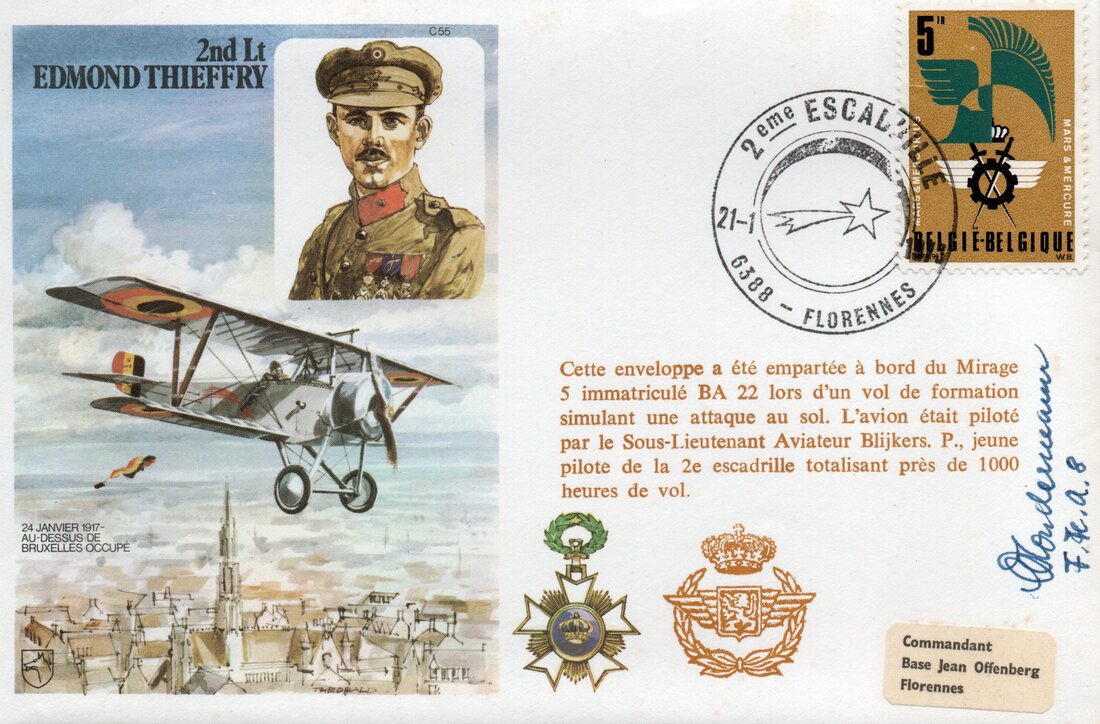 Cover signed by Wilhelm Sondermann. Below is a translated copy of a letter that came with the cover.
Dear Comrade Lüttcher! Together with circular no. 6/1970, you also sent me a brochure from the Mainz publishing house Dieter Hoffmann (Luftwaffe, Volume 1), which interested me very much as I found the picture of my own crash from April 9th, 1918 on the front of it. Which surprise ! I would like to briefly describe the incident to you: At that time we were lying with Feld-Flieger-Abt. 8 (currently Captain Vd Oelsnitz, formerly Captain Jermann, later Captain Hüser) at the Helemes airfield near Lille. To support an infantry attack north of the la Bassée Canal, I and my observer (Ltn. Schneider) received an order to carry out an infantry flight and to bombard trenches and enemy troops with the machine-gun. As you can see from the above picture, the unarmored aircraft, LVG CV No. 9555, carried two ornate S (Schneider-Sondermann) on a white wrapper. On the outward flight, which took place in foggy and cloudy weather, we almost crashed into a tethered balloon that had been pulled down. But it went off well again! We then intervened in the infantry fight and were immediately greeted with very strong machine-gun fire. The cloths laid out by our infantry were easy to see. We flew over the front several times at a height of about 100 m. We therefore received considerable defensive fire at the village of Armentières. Suddenly I felt a strong jolt in the machine. I made a sharp left turn and soon noticed that the aircraft no longer responded to rudder control. With the help of the twist, however, I managed to get into German-occupied-territory. But then I could no longer hold the machine: it took a steep left turn and then crashed while spinning. Everything happened so quickly that the terrible impact came too quickly for me. My eyes went green, red and blue! When I came to, I was sitting up to my knees in the water! With some effort I was able to unfasten myself and free myself, in contrast to my observer, who kept shouting: "1 children, help me". Thereupon some infantrymen rushed up and pulled out the severely bleeding (tn) Schneider, who had hit his head against the machine gun that had slipped forward. Afterwards it turned out that we had crashed just behind the front German line near the village of Perenchies, but had been unusually lucky in the crash. We had "chosen" a shell funnel filled with water for this! The wings had therefore slowed the fall while the engine was in the water, so that the plane could not burn! Findings: side control cables shot through and 20 machine gun hits in the machine. But immediately afterwards we received a new aircraft, an LVG C VI. The crashed machine was rebuilt, but already on June 17th, 1918 with the Vfw crew. Felger and Ltn. Reichert shot down while burning south of Bailleul.

Now I would like to report two other incidents that I also reported to the Field Aviator Abbot. 8 experienced. Ad 1. In our department there was an observer, Ltn. Deichmann (who later became General of the Flieger), who nudged something with his tongue. One day when my observer, Lieutenant Schneider, was posted, Deichmann received the order to take me on a photo flight behind the enemy front near Bailleul. Since we had to fly between 5,000 and 7,000 heights, I greased my face a lot, which Deichmann - as too dirty - refused. After one hour of flight time we were suddenly involved in aerial battles and, despite great resistance, pushed down by 5 enemy single-seaters down to 1,500 m. However, we were able to escape - with 12 hits in the box. Deichmann had to think back to this flight for a long time, because his face was completely frozen. So he walked around with his head bandaged for a long time and, condemned to inactivity, was bored! One day he said to me: "Sondermann, do we want to catch some fish? - I replied:" Well and good, dear Deichmann, there is enough water in the fish pond next to our hangar, and there are fish in it too. But how are we supposed to do that, we don't have any fishing tackle! "-" Nothing easier than that, "he said," we just tie up a couple of hand grenades, pull one off and throw it into it. You should see how the fish come out! "No sooner said than done! Deichmann got the hand grenades! After the preparatory work was done, we took cover and the concentrated load flew into the water. There was a huge detonation, a very unheard-of crash! And Countless fish lay on the bottom, on the ground or swam up on the water. "But that will make for a fine lunch," said Deichmann. - - "There will be something else," I replied. "Why don't you turn around ! "Unfortunately, because of his association, I couldn't see whether Deichmann grimaced. The hangar had collapsed and five aircraft had to be damaged and pulled out of the hangar !!! 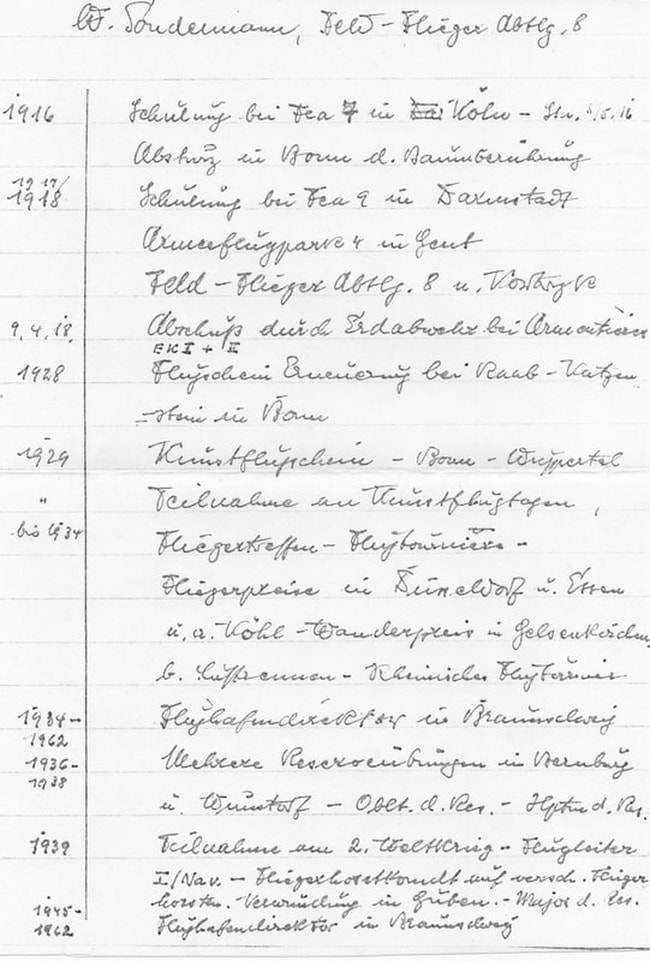 This was also enclosed, but sadly a bit beyond my language skills. 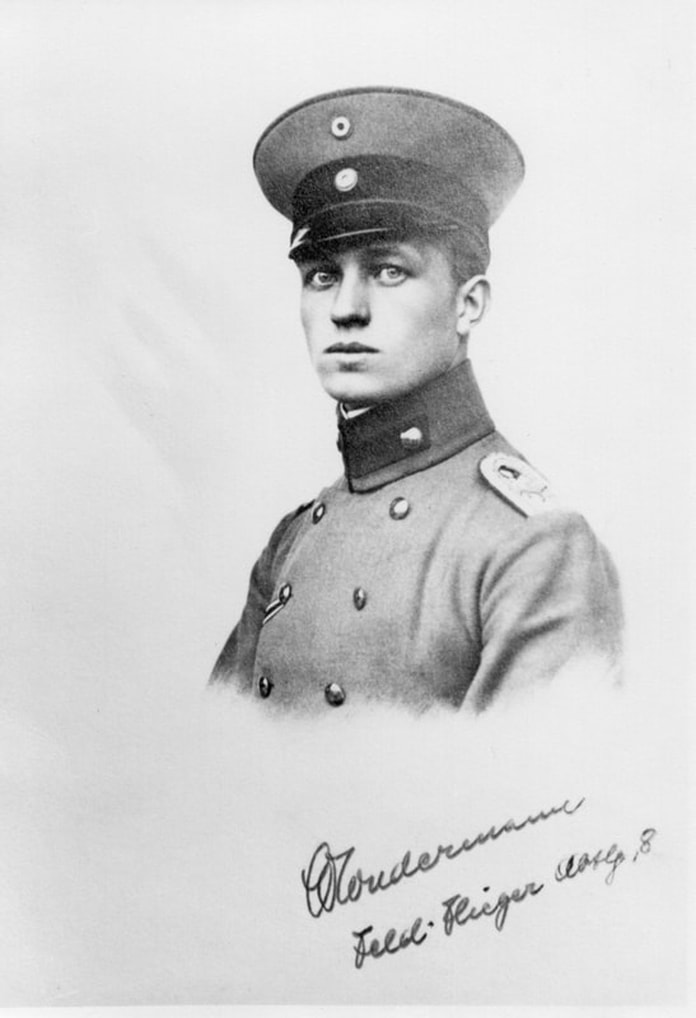 A period photo of Sondermann. 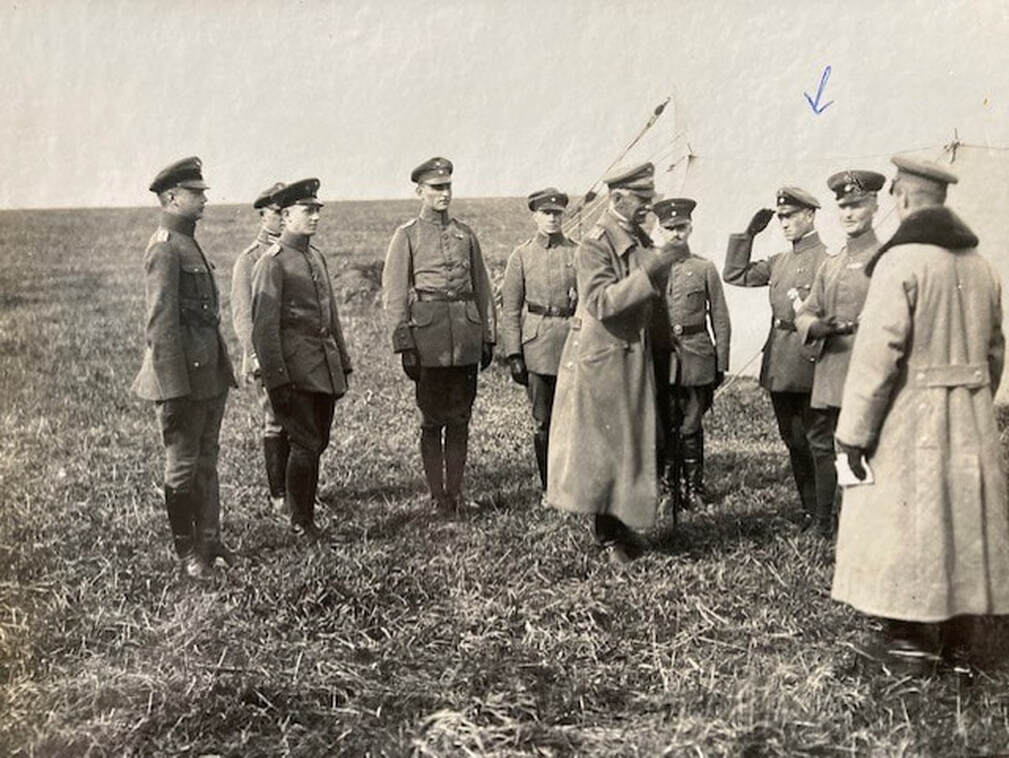 Willy Sondermann arrowed. This and the following photo's kindly supplied by Willy's Son Dirk, himself an ex Air Force pilot, and still flying into his 80's ! 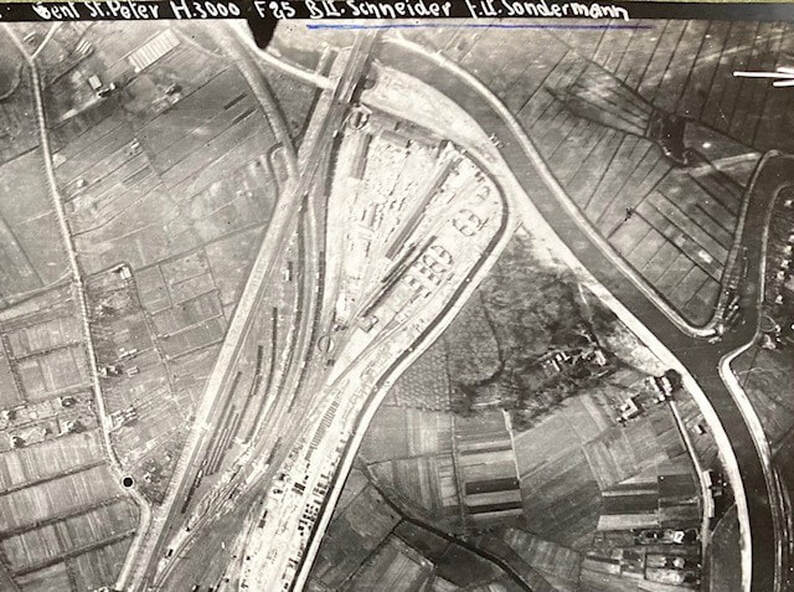 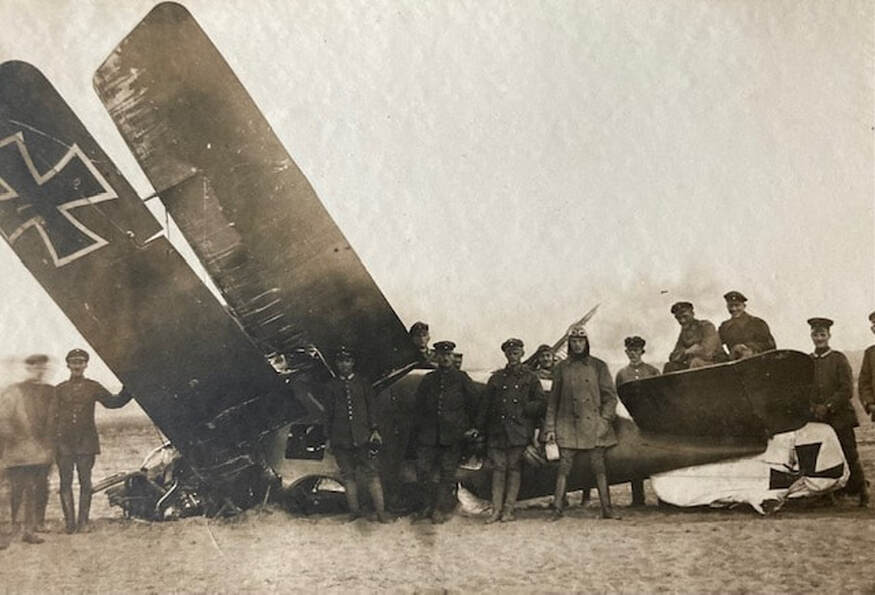 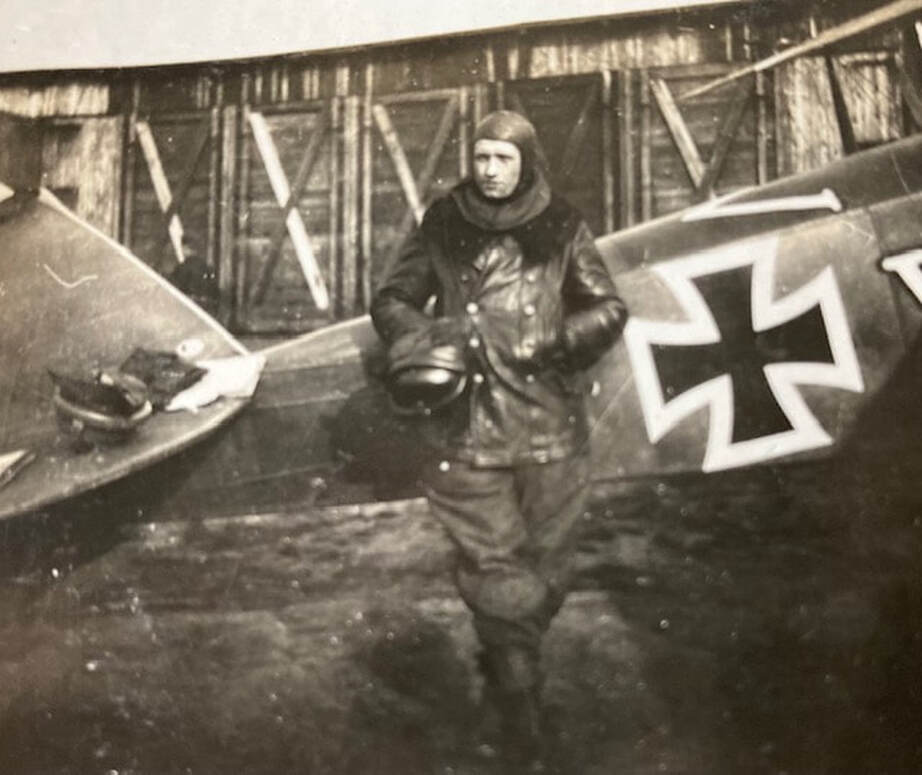 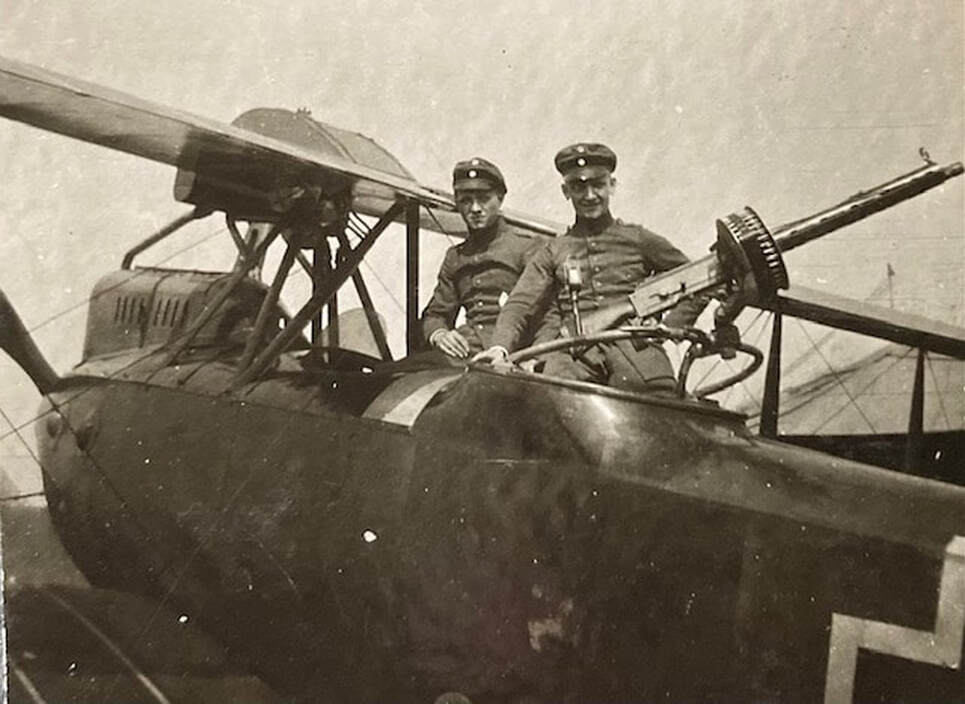 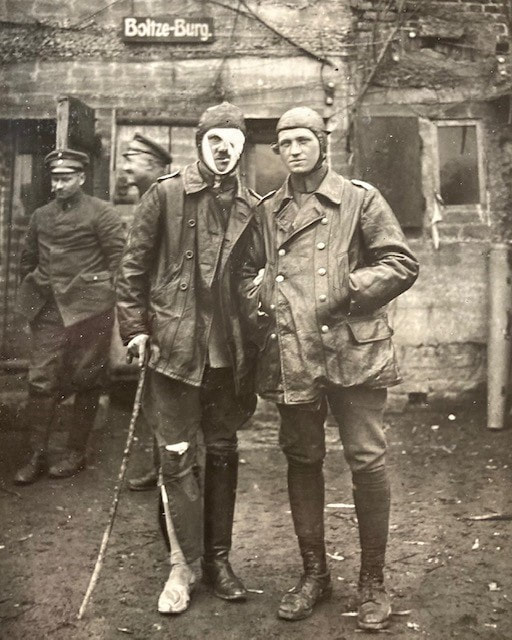 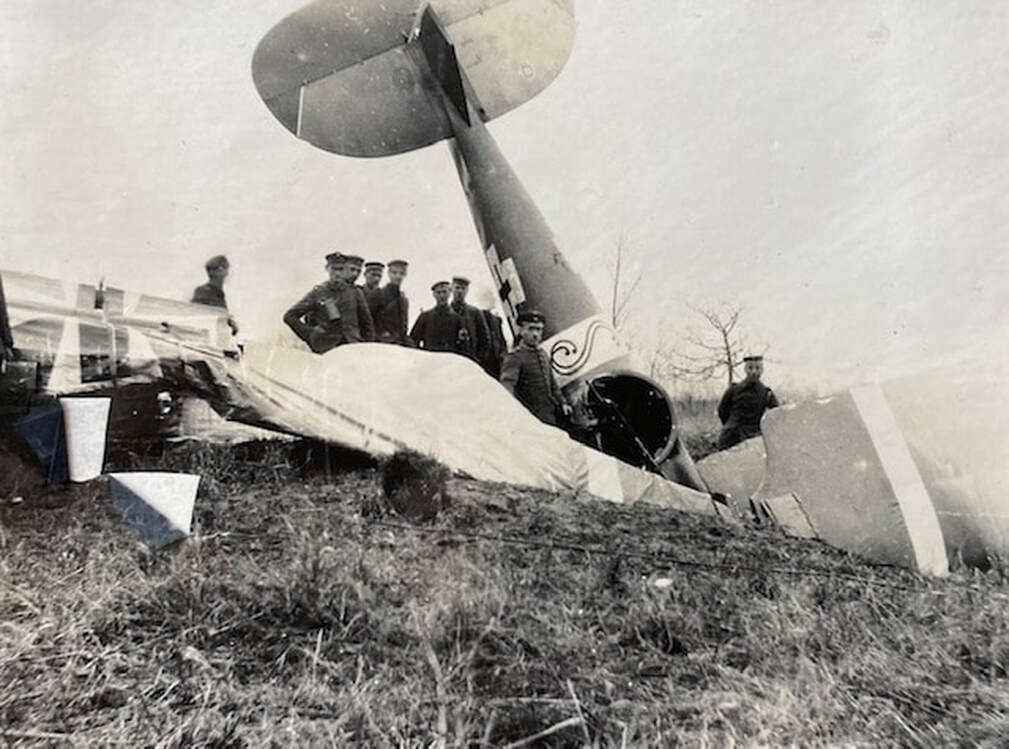 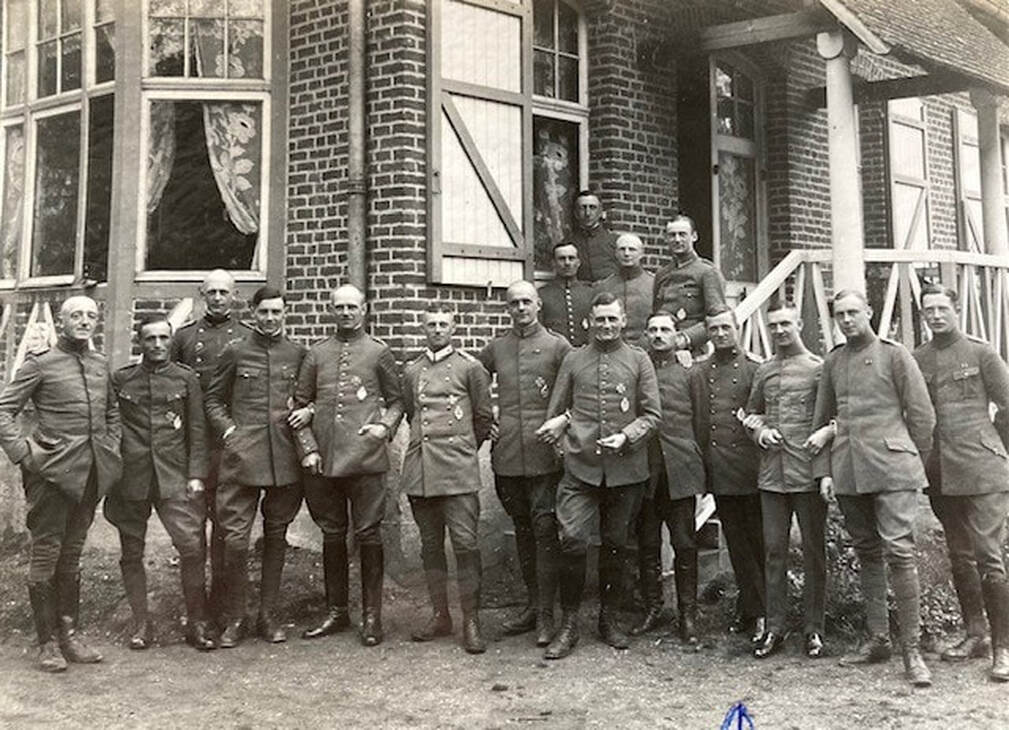 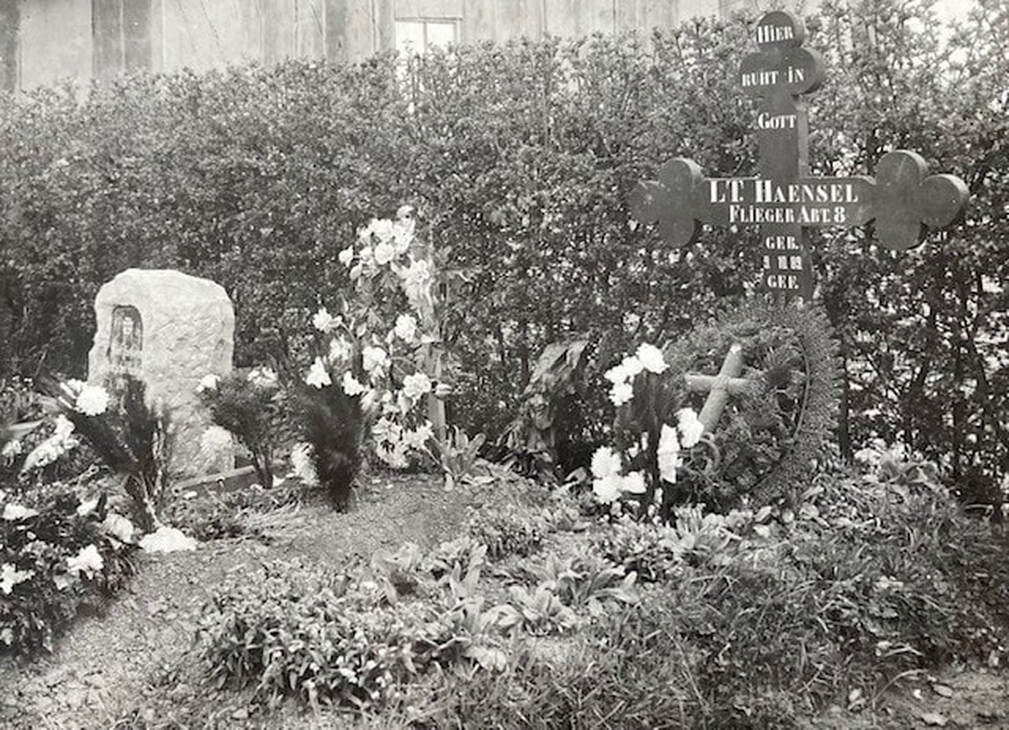 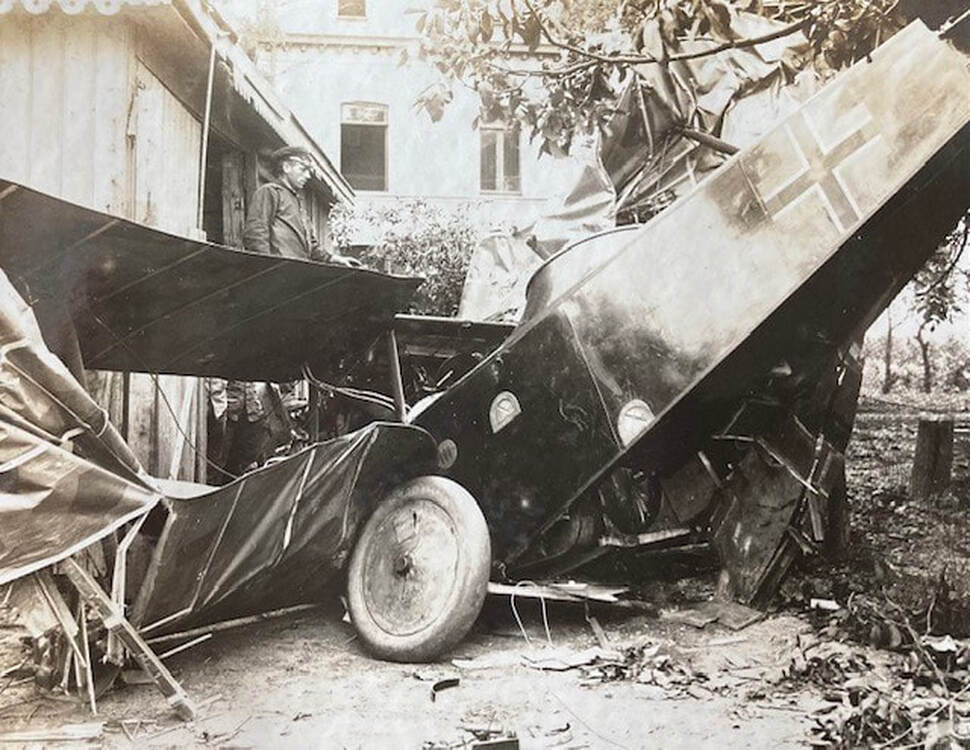 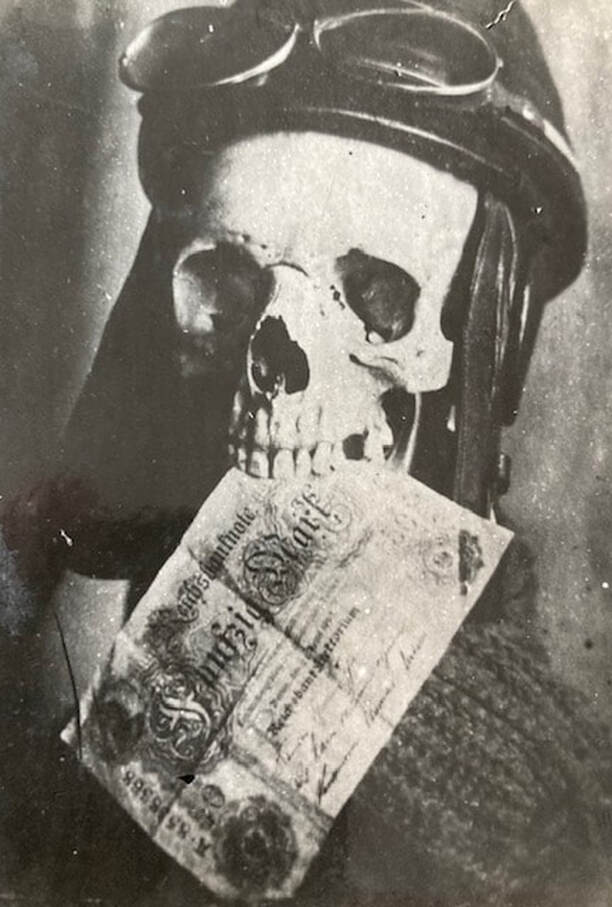 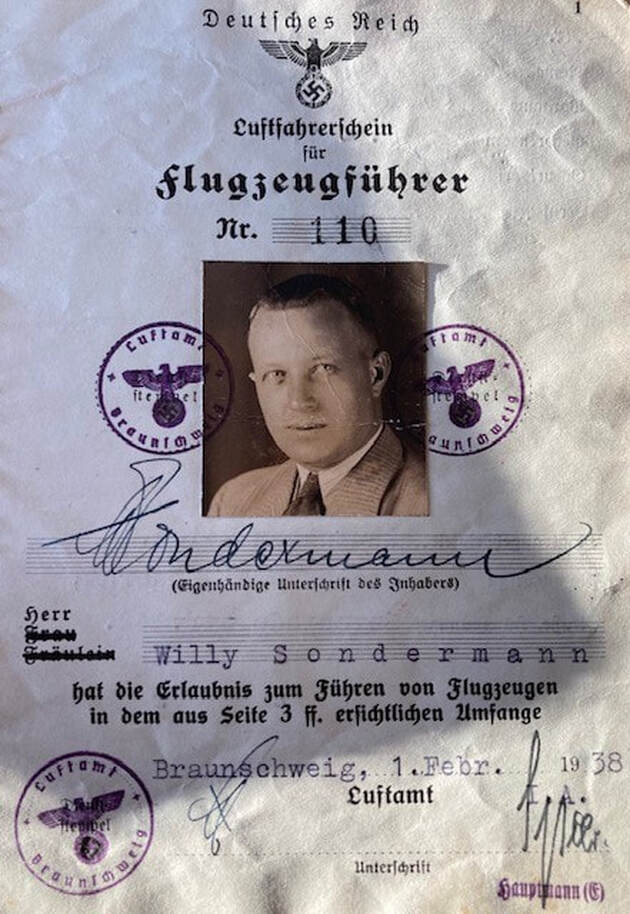 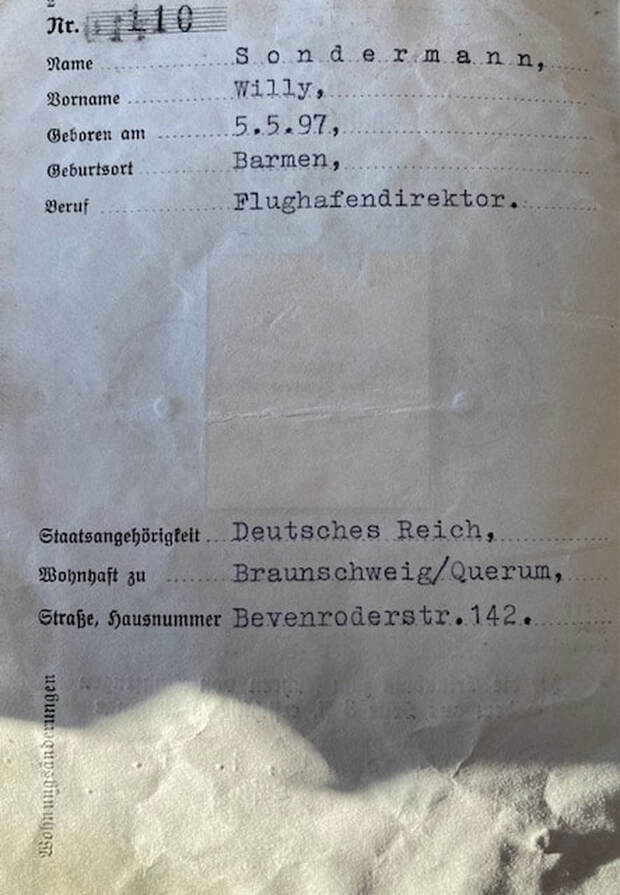 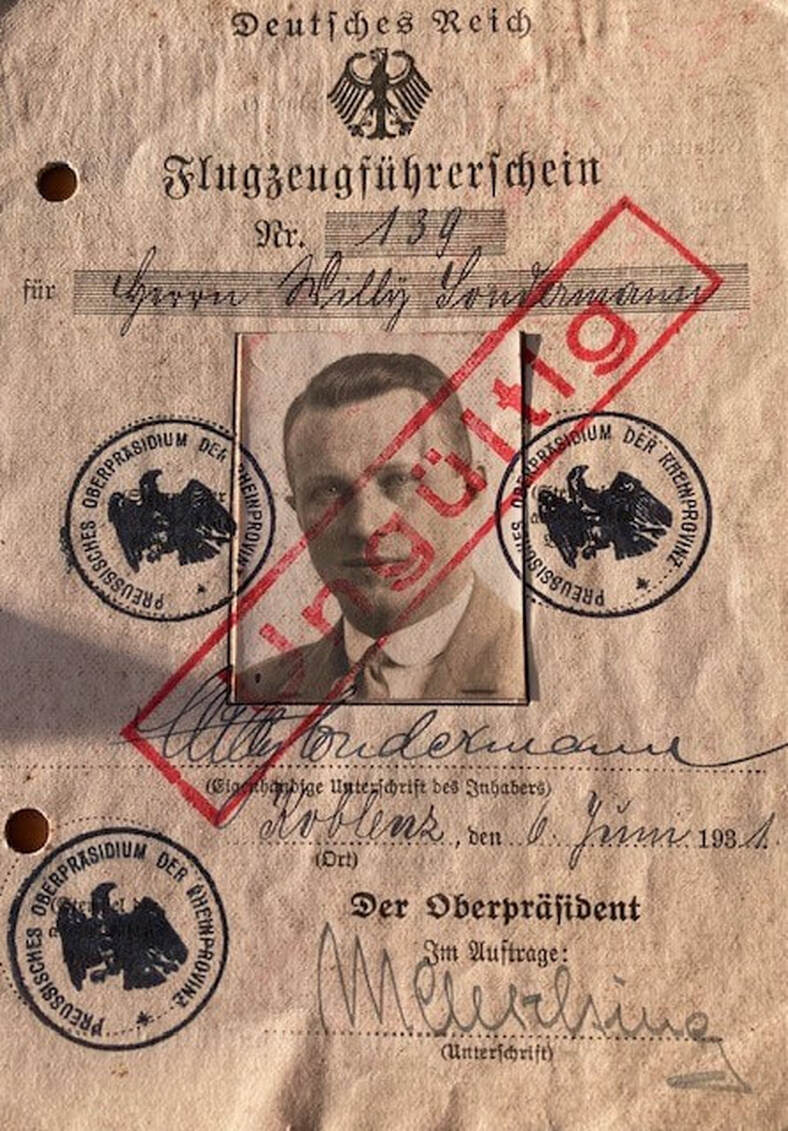 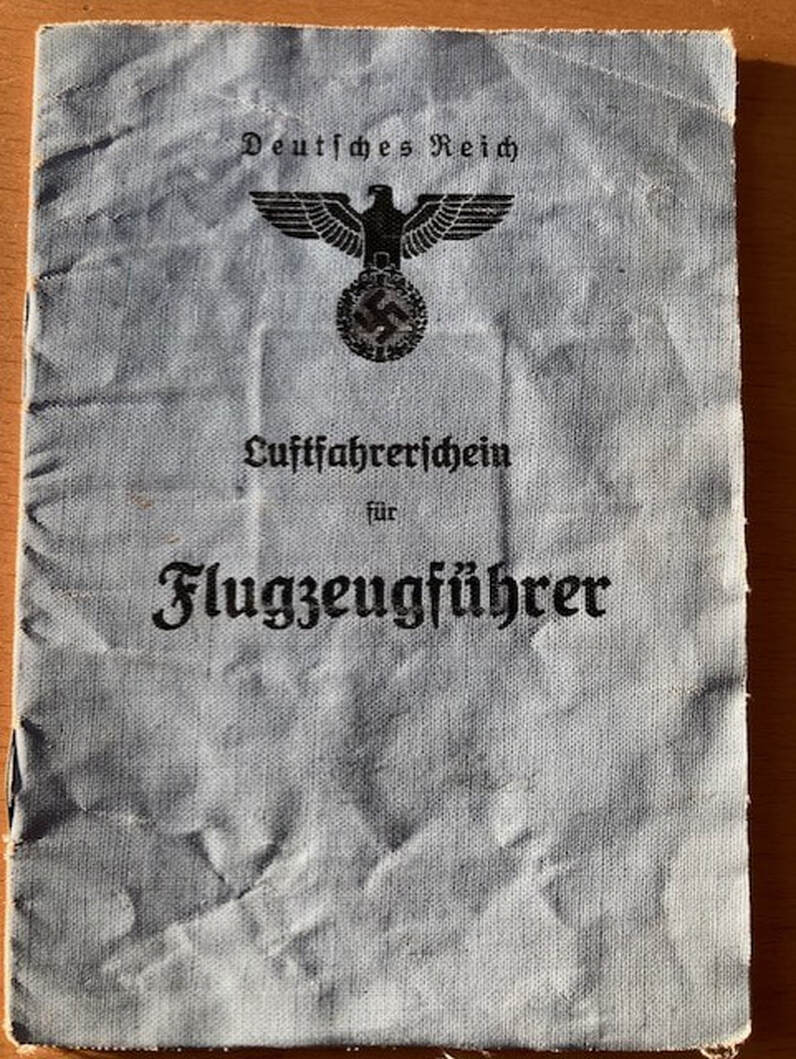 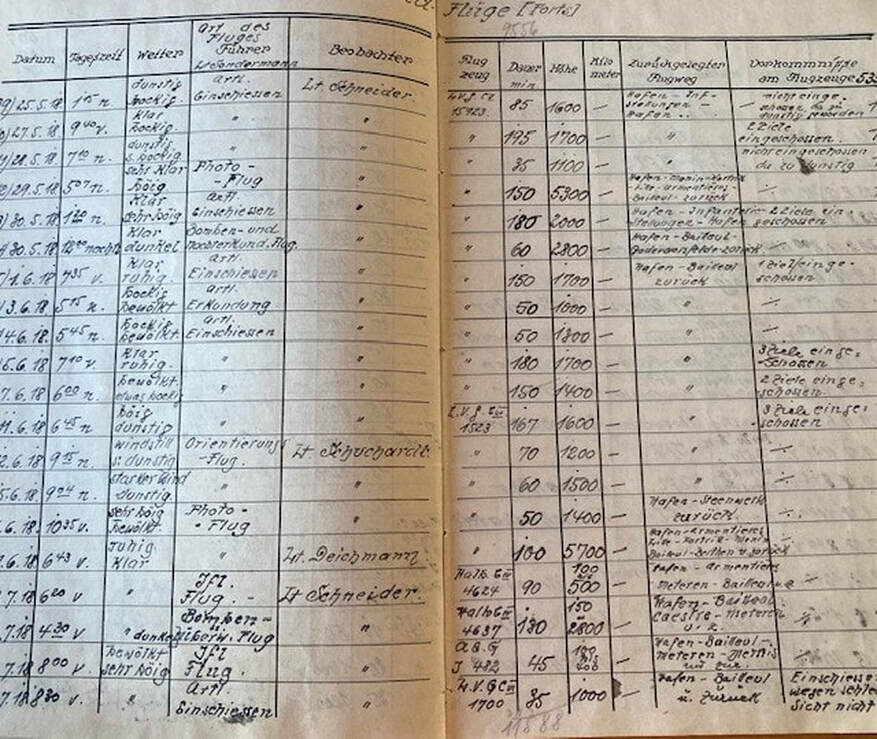 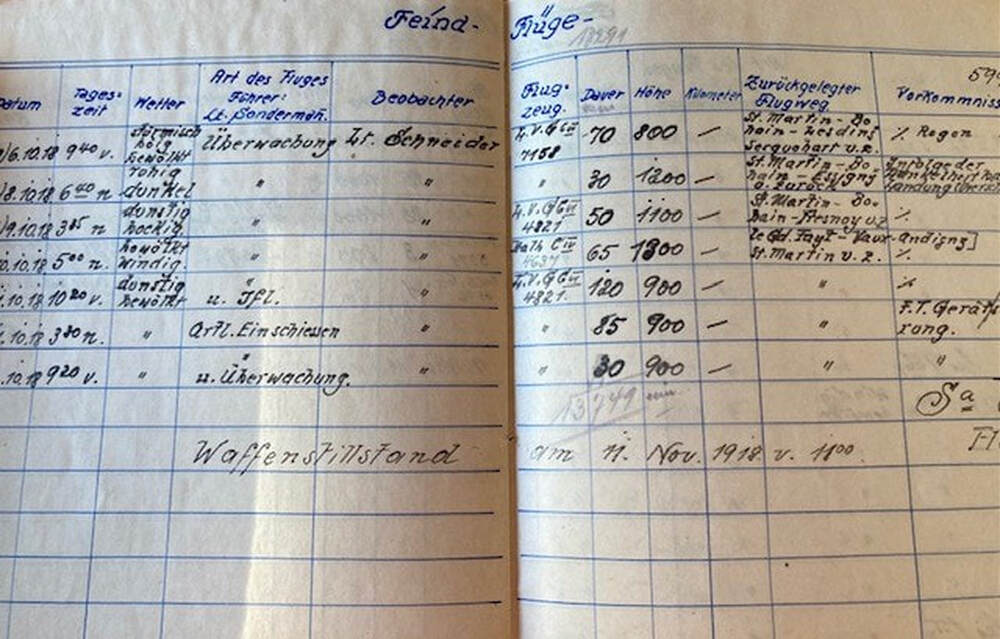 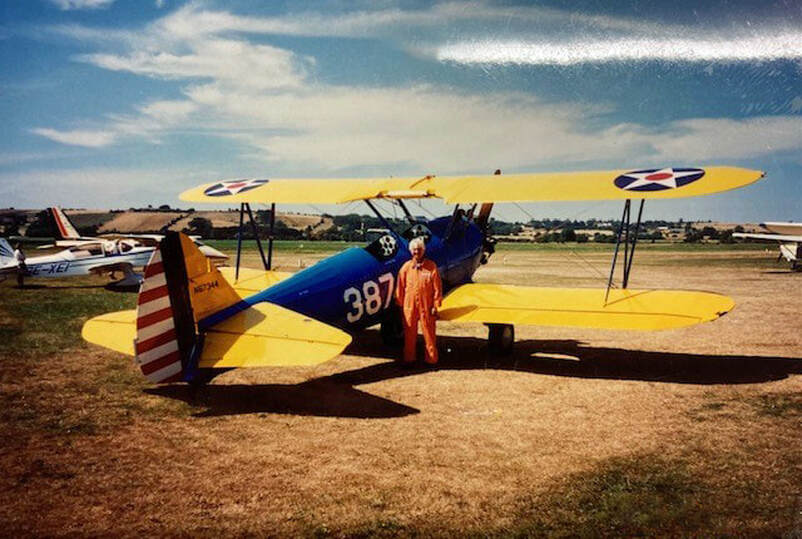